TALK THROUGH IT ◊ EPISODE EIGHTEEN

STUART MELTZER SITS DOWN WITH ZOETIC RESIDENT PRODUCTION STAGE MANAGER AND COMPANY MANAGER AMY RAUCHWERGER TO DISCUSS HER ROLE WITH ZOETIC AND THE START OF AMERICAN SON. 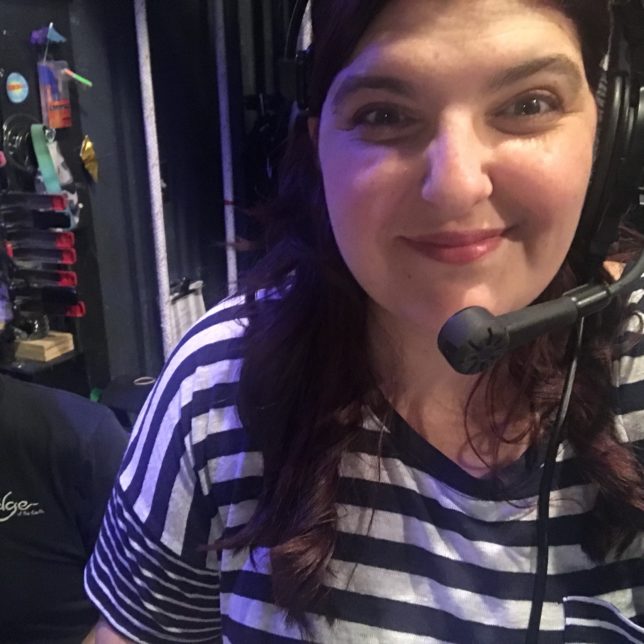 Stuart: We’re in our Holiday rehearsal mode for American Son by Christopher Demos-Brown. You’ve been a part of this family going on five years now?

A: This is my sixth year.

Stuart: This may sound weird but who hired you? Who brought you on to the Zoetic team?

A: So, Elayne Bryan. It’s funny, I interviewed with Elayne Bryan for the theatre company that she had/was running, it was this really cool smaller company–Project Theatre.

A: And so she interviewed me and offered me a job with them but unfortunately the finances didn’t work out for the distance I would be traveling daily—it just didn’t work out logistically. But she called me the next day and said “I know you can’t do Project, but I need an ASM for a different show I’m working on with Zoetic Stage”.

Stuart: Is that how you wound up starting your time with us as Assistant Stage Manager, then Production Stage Manager, even to the point of Company Manager now as another responsibility amongst a lot of other stuff?

A: Exactly. Elayne recommended me, then Kerry Shiller interviewed me over the phone and offered me the job because you were unable to do the interview.

Stuart: Your first show with us was Detroit, by Lisa D’Amour.

A: With the real grilling of food….

Stuart: There was a lot of real stuff in that one…You learned a lot with that show.

A: Yeah, I learned all about fireproofing entire sets. I remember Michael McKeever (set designer) and I were furiously painting the back of all our set walls with black fire- retardant paint the day before we opened because we weren’t allowed to have an audience in the room with fire without everything being flame proof.

Stuart: So you had just come from Florida State, you got your bachelors there. So was this kinda of like your first job?

A: When I was in college I worked for Endstation Theatre Company in Virgina, so they were my first theatre job. I was an intern the first year I worked there—it was unpaid other than housing and a food stipend. Then in my junior year they called me and said they really wanted me to come back the next summer but they believed I should be paid, so they created the position of Assistant Production Manager and paid me for my work and time. I SM-ed one of their shows and worked there. That was my first paid theatre job.

Stuart: And then not too longer after you took after Production Stage Manager job here at Zoetic Stage, right? What was your first show?

A: The first show I PSMed with Zoetic was Stripped.

Stuart: Stripped… Chris Demos-Brown’s Stripped! Which is a really great Segway to us sitting right here all these years later working on—

A: Another Chris show!

Stuart: Right! American Son! This one didn’t get it’s premier at Zoetic but it is still really sort of family like in many ways.

A: I’m excited about this one because I feel liked it’s been a bit since we did a small cast, intimate, realistic production. We didn’t do any of them last season, we did Every Brilliant Thing but that was different.

Stuart: That wasn’t a realistic show.

A: Right, and it was such a small cast (one) but there was so much audience participation that it felt like a very large cast in so many ways. So, we haven’t done one of these shows since Dancing Lessons in our 2017-2018 season.

Stuart: So can you tell us as a Production Stage Manager, what does your job entail? 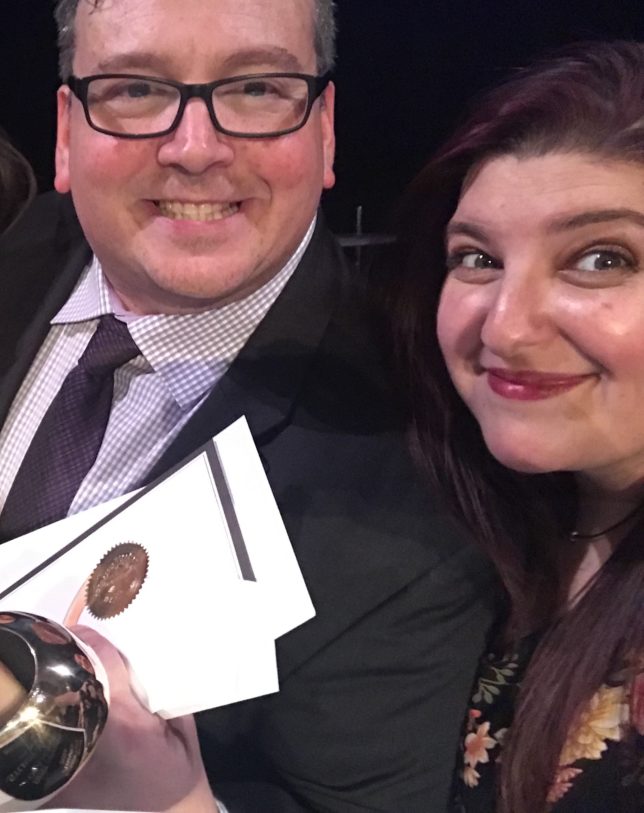 A: (laughs) I don’t know! How much time do we have? Okay, so what does my job entail? So many thing! Really, just a lot. I would say PSMs are the big facilitators of the final product. We are there from the very beginning and we work to communicate all the director’s ideas to the design team, and vice versa. Then when we all get into the room together it’s my job to make sure that all comes to life in the way the team envisioned it would. We make sure everything runs smoothly and everyone has their opportunities to create and work in a safe and happy environment. We make sure the show gets up and running and then stays that way through out its run.

A: A major part of my job is communication and safety…and….

A: Yes! A lot of organization!

Stuart: And do you find that you can read my mind now? We’ve worked together a long time.

Stuart: And sometimes my process is a little more difficult to put a handle on.

A: I love your process. I think it took me a second to understand it, but I think it’s probably the best way of doing things. I think it’s better to work moment to moment like you do, and do all the major refining as you go along because that’s not only helpful to the actors to get it in their bones, but it’s also helpful to me because that means you’re thinking moment to moment not just for the actors, but you’re also thinking that way for the sounds you want to hear and the things you want to see.

Stuart: And we do a lot of that on-hand in the creative process.

A: Right! And that gives me more time to fill in our designers.

Stuart: Exactly, like we did Wednesday. It was our first day of blocking and we put a lot of that together. Automatically we’re creating a sound-scape, we’re creating realism around the scene.

A: You’re saying things like “I would really like to see this cool lighting effect in this moment”. Well that cool lighting effect doesn’t just happen in a second. I communicate that to Rebecca Montero, our lighting designer, and Rebecca has to creatively think about how she wants to make that happen. Then, she will get back to me—she’ll ask questions, she’ll get in touch with The Adrienne Arsht Center about what instruments are available for her to use to make that moment happen, and all of that takes time. So if you were someone who left all those instrumental creative moments to the second or third time we worked through a scene, or to the very end, we wouldn’t have time to facilitate those incredible moments that make our productions what our audiences know us for.

Stuart: And then lastly, or second to last, what are the three projects that you’re most proud to be a part of.

Stuart: No one’s feelings are going to get hurt!

A: No, I know! But there are so many aspects of so many projects that I loved, and so many aspects of those same projects that maybe I haven’t loved so… it’s going to take me a second… I think one of them would be The Wolves that we just did. I think the whole group was so wonderful. I think we had such a great atmosphere and such amazing teamwork on that project, so that one stands out for me. I would also say Sweeney Todd, that was a big one—a lot of components, and literally a lot of moving parts, we had a double doughnut turntable…. We did a very big show with a very reduced cast and reduced time frame…. Oh man I only get one more pick….

Stuart: Let’s say this: What was one you learned the most from?

A: The Curious Incident of the Dog in the Night-Time. I think we all, collectively, learned a lot from Curious.

Stuart: I agree with you on that. And last question: Why do you think audiences should see American Son?

A: I think, first and foremost, it’s important. I think the subject matter is very relevant and I believe this show shows many different perspectives on the issue that maybe audiences haven’t explored. I also think American Son is a beautiful play, I think it has a great storytelling arch, and I think it’s great for our space. Our design team is going to do a fantastic job and it’s really exciting!

Stuart: They’re going to do a great job, there’s a lot of theatre magic in this one.

A: There is a ton of theatre magic, and that’s my favorite part!

Stuart: I know that it’s hard to step out into the lime-light sometimes, I don’t think people realize that you are so much of the success of this theatre company.

A: Thank you, Stuart. 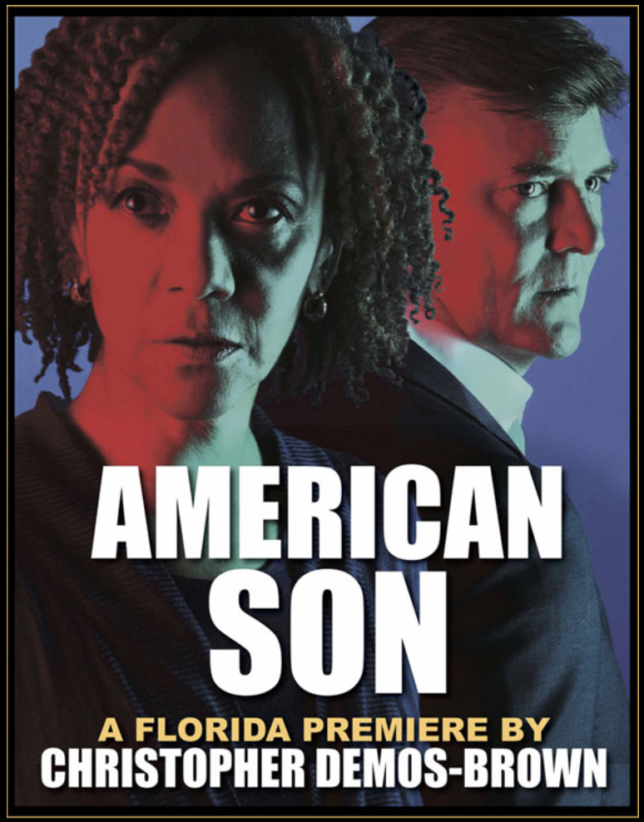