TALK THROUGH IT ◊ EPISODE NINE

THE FINAL PART OF STUART MELTZER’S CONVERSATION WITH GREGG WEINER, STAR OF EVERY BRILLIANT THING.

Stuart: Why is your middle name Stuart?

Stuart: Are you named after someone with an S, was it one of your grandparents?

Gregg: I don’t know…I think so… or an uncle…I don’t remember.

Stuart: Did you know your grandparents?

Stuart: They were very prominent in your life growing up?

Stuart: I don’t think I knew that.

Gregg: Yeah yeah yeah. They’d give me money when I came over, and I’d sleep over their house, you know, they were sweet.

Stuart: They lived in Philadelphia?

Gregg: No, they moved to Florida. Deerfield Century Village.

Stuart: I really don’t think I knew that. I never knew that you had grandparents.

Gregg: yeah. I mean it’s not the type of thing you talk about in school.

Stuart: Gregg and I went to college together.

Gregg: I think they know that.

Stuart: So, we just spend the last 5 weeks together.

Gregg: has it been that long?

Stuart: What did you get from the play? From doing it? You’ve got a few more performances, but have you been able to process it?

Gregg: You mean from doing it? Not yet. I’m still in it. I think even after our final performance, and then even after that, it’ll take a while to process. But I do know that I feel pure joy and creativity and fulfillment. This show checks every box in my performing checklist as far as honesty, humor, relevance, pathos, empathy, and connection. More than anything that’s the big one. Connecting with people who may need it.

Stuart: I spoke with some people yesterday who saw the show and they could not stop talking about it and their experience. One of the actors, Kimberly Doreen Burns, who is in Sweeney Todd, The next show coming up at Zoetic Stage—

Stuart: Thanks! Anyway, she was so taken by this story. She said she absolutely needed to see this play that night.

Stuart: How long were you memorizing the play?

Gregg: and I just took my time with it because I had the luxury of that, and I learned quicker than I thought I would. I was done about a week before we started rehearsals—really having it memorized. So I guess 6 weeks, but at a slow pace.

Stuart: But you’re a quick study.

Gregg: yeah. It’s also discipline and hard work. You know every night I go to bed and I run lines in my head that I learned that day. I’m not just gifted from the heavens… discipline baby, DISCIPLINE.

Stuart: Anything that you want to leave us with? I love that we’ve talked all these weeks and really touched base on it.

Gregg: me too! It’s been an absolute joy, I had expected it to be a joy working with you again.

Stuart: You’re going to make me cry because I felt the same way, I’m being serious.

Gregg: Yeah, I know, alright, I’m glad Amy can’t type up “your eyes are welling up with tears”, although I’m not! Stuart is. I’m feeling it right in my throat right now.

Stuart: But he is pants-less again…

Gregg: NO I’M NOT! It’s almost time for the show!

Stuart: All right, Gregg, well until your comeback on the next Zoetic show.

Stuart: We’re going to have a really fantastic weekend! We close on Sunday the 3rd, come out and see this fantastic show! 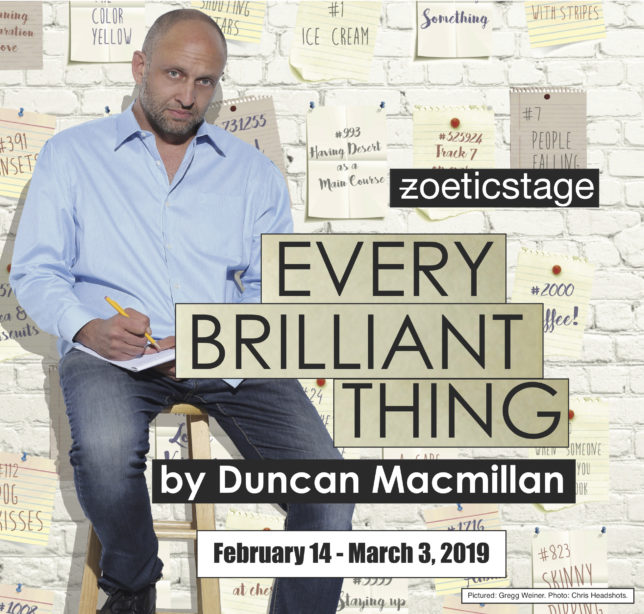